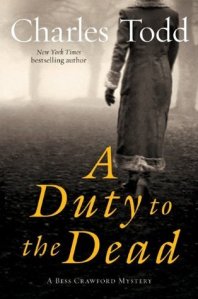 An elegantly written romantic mystery with a surprisingly gruesome plot.

A Duty to the Dead was quick to read and immersed you instantly into the setting. It had many lovely and quotable passages. I was surprised by how dark the plot was, it featured multiple violent incidents against young children by authority figures.

The main character is Bess, a war nurse who was believably courageous and intelligent with a love of justice from her upbringing in India. She reminds me a lot of Anne Perry’s Charlotte Pitt.

After a deathbed request from a young soldier she nursed, Bess eventually goes to his family. She finds his mother and step-father along with two brothers. Arthur’s dying words of ‘Peregrine didn’t do it, mother must be told‘ ought to be good news – but it’s clear that the family isn’t at all pleased.

After learning Peregrine is in an insane asylum, Bess is soon caught up in the seemingly unrelated death of a young maid when the boys were kids and a local soldier who is suffering from PTSD. She continues to persevere even as more people are murdered and her life is threatened.

I’ll definitely give the next book a try, but I intend to keep an eye out for the violence level.