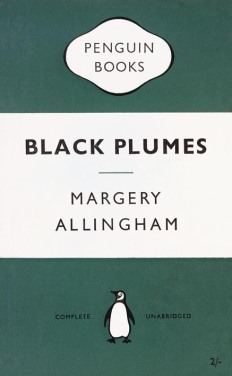 An exquisitely constructed post-war mystery that keeps you guessing.

Another classic and delightful Allingham book. Instead of her usual detective it is narrated by the very charming young Frances. She’s desperately trying to tell her regal grandmother that the family gallery is going off the rails fast. The chapter culminates with a dramatic scene featuring a slashed painting and a seemingly simple argument that will descend into murder.

Why is Frances’ brother-in-law so furious when she turns down his friend, an unctuous and slimy little man? Why is her half-sister such a miserable, terrified wreck? When a murder occurs, they all know someone in the house is a killer. Despite the police presence no one feels safe, perhaps because the police are there as much to arrest as to protect.

There are a veritable feast of suspects and Frances is hard pressed to keep her cool. Could it be her own hysterical half-sister, the victim’s unhappy wife? Or perhaps Frances’ new fiancé, the artist whose painting was slashed and who wants to marry immediately so they can’t testify against each other? Even her beloved and regal grandmother, whose mind slides in and out of focus, could be using her age as a clever cover.

The book is seen through Frances’ uncertain and troubled eyes – Allingham uses this device brilliantly. We follow along with Frances, tortured by the conflict between her conscience and her sense of loyalty. The Scottish detective Birdie keeps his own counsel, so along with Frances we wait and listen to what clues drop, hoping to uncover the truth and protect the ones we love…