A gripping account of WWI with a tragic love story and a psychological mystery.

When officer Captain Gurney stumbles into a ruined chateau, he is mystified why anyone would be playing a familiar British tune in the middle of the war. He discovers a German officer at the piano and a beautiful woman in white beside him. Both are dead.

But even more mystifying is that the German officer is actually G.B., his old friend and British officer Gerald Bretherton. How did G.B. come to this eerie chateau and how did he die? Is he British or German?

It is impossible to tell if G.B. is German or British until the very end. An equally good case could be made for either. The story is told from many views, including other men in G.B.’s unit and the diary of G.B. himself.

This story was written by a British Major who served in WWI and his treatment of the boys on the front is touching. He captures a sense of camaraderie, exhaustion, anger and bravery. It’s permeated with a sad, typically understated humour. After receiving a medal, G.B. says “Headquarters give decorations as lightly as they give up bits of the line that have cost lives to take.”

The premise is excellent but I found the mystery’s solution wasn’t entirely credible, like Agatha Christie’s more obscure short stories where the ending is a pseduo-psychological phenomenon. It also became obvious where the story was heading, so the last few chapters of the book fell a little flat.

A worthwhile read for the account of the war and G.B.’s tragic love story, even if the ending does not hold up on the suspense angle. It would also make an excellent movie. 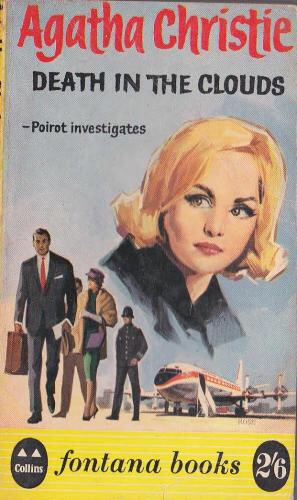 Somehow an old woman is murdered on a flight from Paris to London in plain view of several passengers. What might have passed as a death by wasp sting is foiled by the presence of Hercule Poirot.

Mr. Poirot is not just any detective. To most mystery readers, Agatha Christie is legend. Arguably her most treasured creation is Hercule Poirot, a short Belgian with a beautiful mustache and a penchant for truth and absolute symmetry. In this case, Poirot is one of the suspects (although not very seriously) when a murder is committed behind his back.

The murder by exotic blowpipe is so boldly, imaginatively executed that the Chief Inspector Japp is positively insulted. And yet, despite Japp’s insisting it to be mere luck, our favourite OCD detective Poirot says we must judge the end result. It is a successful murder.

This time Poirot is not accompanied by the sweet Hastings, who is a chivalrous bundle of passion and kindness, a Watson-like figure. Instead we have a French detective who believes in the psychological elements of a crime, unlike Japp, yet even he begins to doubt Poirot at times.

Despite Poirot’s frequent cry of ‘the grey cells’ and his disdain for rushing around, he does just that in this book. He follows and questions suspects, persuades them to do things for him, hunts for evidence, and generally gets so involved that it’s impossible to determine who he’s after. This one kept me guessing until the end.

Sometimes cozy murderers are sympathetic, especially when the victim turns out to be a blackmailer. But this murderer is pretty well heartless and ruthless, without even a shred of conscience…

A sparkling tale of the first lady detective in England, brought back to print by the British Library.

This amusing story was first published in 1888. Ms. Miriam Lea is an engaging and delightful narrator. She is surprisingly sassy given that she is a woman in the late 1800s. Despite being down on her luck, she manages to secure a position as a detective for an agency.

She is soon travelling through the continent and headed to the diamond mines of South Africa to pursue an embezzler. There are many twists and turns in the case but I found myself both amused and a little disappointed by the ending. I suppose it was 1888 after all.

The book is written in diary form, which I usually detest but in this case it worked out quite well and made for a very fast read.

Strangely, Leonard Merrick never wrote another detective novel and went on to buy and destroy all the copies he could find. “It’s a terrible book. It’s the worst thing I ever wrote. I bought them all up and destroyed them. You can’t find any.”

Thankfully he didn’t get quite all of them.